Sometimes, a poem and a field and grief

*The following post first appeared on the Poem Elf blog. I am honored to have one of my poems featured there.

Sometimes I bring my hunger to the field.

I sidestep the soft mounds,

the ants at their labor,

their back and forth with grains of sand.

I wait in the milkweed and withering thistle,

all of it turning and rustling in the wind.

I mean to come clean of everything—

no reason to want what isn’t.

they fly among the branches

not crashing into anything.

Dark with the next thought,

the ground is a wet reek

of old leaves and battered grasses.

It fills my mouth.

I am a wet outline now.

Now I am on my knees remembering

the summer we drove west

Fields flooded and the river

swelled near the trestles

and freight trains passed us all night

and then it was morning.

(This poem first appeared at Wake: Great Lakes Thought and Culture in 2010) 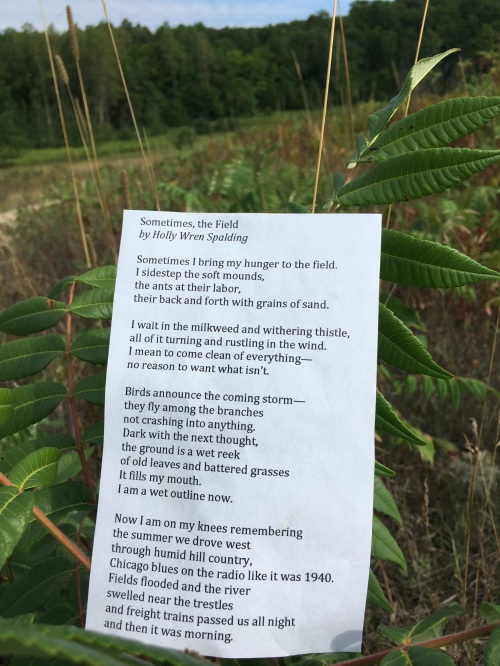 My poem-elf fantasy—and one of the reasons I write this blog—is that a poem I leave behind falls into the right hands at just the right time, and a life is enriched, a perspective altered, an experience understood. When I place a poem in a tree or on a sidewalk or store shelf, I always imagine the person who finds it. Let’s call that fantasy, named after today’s poem, “Sometimes, a poem.” As in, sometimes a poem can change everything. But also, sometimes a poem changes just a little thing. Even a little thing is a lot work for a few words to do.

Unfortunately, the only time I’ve been aware of Sometimes, a poem happening, it’s been happening to me. And once again, Poem Elf has elf-ed herself. “Sometimes, the Field” caught me unawares even after I had chosen it, printed it, and thought about where to put it. Over several readings, the poem illuminated an experience I had had. There was no lightening bolt of understanding—just a burrowing into my conscious life and a permanent residency there.

I came across this poem because poet Holly Wren Spaulding made a comment on Poem Elf. Her beautiful name intrigued me. Turns out she’s a poet who spends summers in northern Michigan, as I do. I decided to put one of her poems up north, in its native habitat, so to speak. When I looked through her work, my choice was instinctive: “Sometimes, the Field.”

I have my own field, you see, but I’ll get to that later. First, Spaulding’s field.

The field in the poem is dark and moody, full of movement and the drama of a coming storm. The poem’s speaker has come here with a restlessness of her own, a soulful hunger. She wants something. What she wants is not to have the hunger she came with.

I mean to come clean of everything—

No reason to want what isn’t.

As she steps into the field, she observes her environs with a quiet respect that draws me in. Somehow the way she knows her place in the field makes me feel tender to her. She sidesteps the ants’ work. She waits quietly in the weeds and wet earth. She admires the skill of the birds not crashing into the wildly flying branches.

As she waits in the milkweed and withering thistle, she becomes absorbed into the landscape, and the external and internal storms come together:

It fills my mouth.

I am a wet outline now.

The heavy humid air has connected her to the memory of a long ago road trip, a lost romance. Overwhelmed with grief, she falls to her knees.

We don’t know if the storm will wash away her pain. She may well leave the field with the same hunger she came in with, the wanting what isn’t. But at least she’s been able to mourn it openly, dramatically. Cathartically, I hope.

My tenderness for this speaker grows as I picture her on her knees in the open field, weeping, giving over her body to grief. The field allows her to express emotion un-self-consciously, a great gift. You can’t cry this way in a cubicle or mall unless you enjoy being stared at or whispered about. If you fall on your knees anywhere but church, someone will call an ambulance.

This is where my field comes in.

What Catches Your Ear, Your Eye?The Poet in the World, Uncategorized

Poetry is an Antidote to Politics and PunditryCourses, The Poet in the World, Uncategorized